As St. Louis primary draws near, State Rep. Bruce Franks Jr. is the latest to give mayoral endorsement

Elections are the starkest of popularity contests: One person wins, and the others go home.

High-profile endorsements matter most if it motivates people to canvas, call, and convey voters to the polls. That was the message Friday night on Cherokee Street, when one of the last long-awaited endorsements came in.

Bruce Franks Jr., the self-styled superhero who won in the courts and at the voting booth to become a state representative, told a boisterous crowd at Foam that the “excitement and hard work” that went into his upset election needed to continue for the mayoral candidate of his choice, City Treasurer Tishaura Jones.

“These last 10 days are like the fourth quarter of a game,” Franks said. “It doesn’t matter what you did in the first three quarters.”

State Sen. Jamilah Nasheed introduced Franks as “the man who is going to make sure we bring home a victory.” She also told the crowd that this election was a “defining moment for the city of St. Louis.” 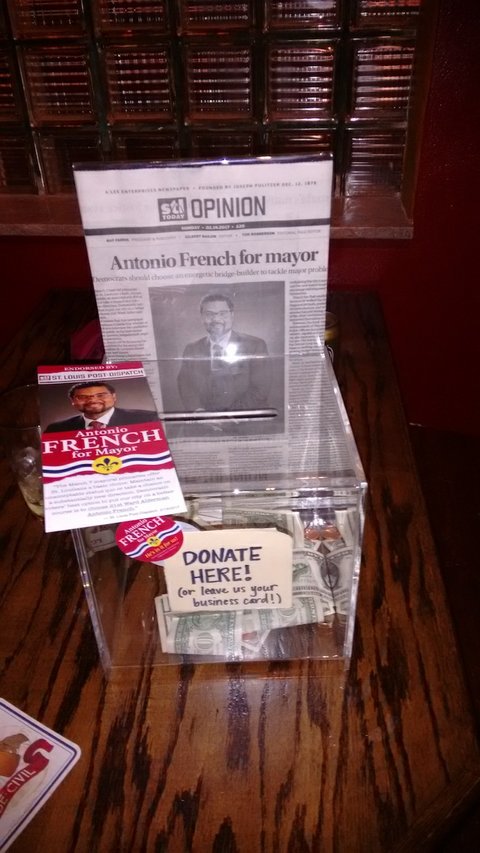 THE ST. LOUIS POST-DISPATCH’S ENDORSEMENT OF ALD. ANTONIO FRENCH WAS EXPECTED TO BOOST HIS CAMPAIGN FUNDRAISING, AS IS EVIDENCED BY THIS DONOR BOX HE BROUGHT TO A FORUM AT THE ROYALE.

As the March 7 primary draws near, endorsements often appear to be a mix of promoting a belief and placing a bet. “I do not relish endorsements especially this time,” Ald. Scott Ogilvie (D-24th) wrote in the first paragraph of his statement backing Krewson. “As an alderman, the reality is if you endorse incorrectly, and your candidate loses, you and your ward can very well be punished by the new mayor.” The Dogtown alderman went on to cite Krewson’s work ethic, toughness, commitment, intelligence, and patience as reasons why he is supporting her.

Krewson is widely seen as the conventional-wisdom favorite in the race, given her 20 years as an alderwoman, Slay’s endorsement, and her significant fundraising advantage.

On Friday night at Foam on Cherokee Street, the packed-in crowd did not seem overly concerned with anything conventional. They had come to hear Franks, who played to the crowd and to his image. He confessed that he had been reluctant to endorse a candidate, doing so barely a week before the election. “Then I heard about a candidate who had a bad attitude,” said Franks before adding, in a distinctively lower voice, “I got a bad attitude, too.”

Franks was referring to the Post-Dispatch endorsement of French and its description of Jones having a “bad temperament” that made her unfit to be mayor. “They’re going to continue to come after her,” Franks said. “Don’t trip off that. Don’t waste your energy with that back and forth. We got a game to win.”

Franks said his endorsement was “not just about putting my name on a piece of paper” and that he intended to “get out there in the streets” to support Jones.

The night before, Franks attended a 9th Ward debate at nearby 2720 Cherokee. Dan Guenther, a former Franks campaign worker, is facing longtime incumbent Ken Ortmann for the ward’s aldermanic seat.

During the event, Ortmann admitted that he was unaccustomed to having a contested campaign since taking over from Martie Aboussie in 1999. “I haven’t had opposition for 18 years,” Ortmann said. “Opposition is good sometimes.”

Opposition also can get testy, as it did that night. The debate was fairly civil, with only a few episodes of booing or catcalls. Later, when the endorsement votes were counted, it ended up in a stalemate with the 9th Ward issuing no endorsement due to the close vote and questions about the 9th Ward residency of voters. Later, Ald. Cara Spencer (D–20) posted a plea for civility, saying that while Ortmann and Guenther behaved themselves, it was “in stark contrast to how some supporters were behaving.”

“The anger in the room could have been cut with a knife,” Spencer said. “It is my sincere belief that there is not a single person running for any office in this city right now who is doing it to destroy the city we love. While I fundamentally disagree with the approach many candidates take to solving our city’s problems, I don’t believe that a single one of them is running for office for purely malicious reasons.”

Spencer was at the 9th Ward meeting mainly to hand out flyers in support of March 7th passage of Proposition S, a proposal to restrict payday loan centers. Spencer has made the issue her main focus and has not made any mayoral endorsements.

As the days dwindle to a precious few, there are too many moving parts in this election to be certain of anything. A citywide race with seven candidates, no incumbent, and a wide array of personalities and positions does not lend itself to easy or safe prediction.

Much of the public perception of the race comes from a poll that has as many holes as the Milwaukee Brewers’ infield. It’s a landline poll, about two-thirds of its undecided responses are from non-white residents, and it inordinately weights responses from vote-heavy wards and does not take into account the number of hotly contested aldermanic races in wards throughout the city.

Political consultants and prognosticators are often similar to military generals who fight a war with tactics from the last war—and that often doesn’t work.

The energy and enthusiasm of city voters reflected in Franks’ victory, as well as Bernie Sanders winning 12 of 28 city wards in the March 2016 presidential primary, might indicate a new political dynamic—or it might be a mirage.

The popularity contest on March 7 could provide answers.